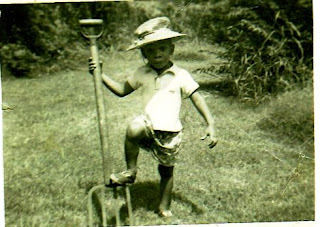 The heat waves were visible to me as I ran in the garden of my grandmother’s home. The large field behind her home contained corn, beans, cherry trees, peach trees, tomatoes, okra, peas, squash, lettuce, cabbage, collards, and wonderful lush, green grass. The clean sheets popped in the wind on the clothes lines as I ran between the clean clothes smelling their clean scent. With my pitch fork, I planted and dug up plants and developed a love for vegetables that sticks with me to this day.

My grandmother with her white skin and long gray hair that went down below her waist, stood there hanging up clothes as I played and worked in the garden in my tender preschool years.
My grandmother’s home was magnificent. It towered above that back yard in white majesty. A long driveway came back to the multiple car garages.

Smokey, our dog frolicked along with me in that garden of my grandmother. His shiny black coat glistening in the sun. The crickets and grass hoppers buzzed in the hot Alabama sun as they issued their mating calls. During the evening, wonderful fire flies came out glowing in their yellow, blue, red and green hues.

The afternoon rains would come and leave a clean scent and rainbows. I put my face close to the leaves and licked the moisture from them. The rich red clay soil nurtured our large garden and yielded a bounty of large healthy crops. My love affair with tomatoes began here.
I learned that if I grabbed the white butterflies, a white powder would cover my hands, bees would sting and I better stay away from the wasps.

Beautiful blue jays and red cardinal birds would land among the green plants and spread their wings in magnificence. How I miss seeing them since I have lived in southern California.

The tall buildings of Birmingham rose above the field in the back yard in stark contrast to the farm like setting I enjoyed in the midst of this modern city. Beyond the tall buildings, Red Mountain loomed with its lush greenness and a statue of the mythical Greek god Vulcan. Vulcan was given to Birmingham by France for steel production contributions during World War II. Vulcan held a light in his hand. When that light was red, there had been a traffic fatality in the city that day. When the light was green, there had been no traffic deaths.

A white sign with WBRC would flash at night on top of the mountain that was adorned with antenna used by television stations. I was aware that the Bozo the Clown show, Popeye the Sailor and Captain Kangaroo shows came from these stations. I imaged that they lived their and wanted to visit them. The stations sponsored birthday parties for kids where we were televised. I got a chance to have my party there and it was terrifying.

A blue haze often hovered over the city many days. People were allowed to burn their trash in the backyard inside of large barrels or metal trash cans.
My sisters with their shiny black shoes and flowing dresses, made earthen pies with their kitchen toys and cute little tea sets. They had a play house and wore cat glasses with pointy tips as was fashionable in the 1960’s.

They would say “Make the monkey face” and I would happily oblige as they erupted in laughter. I was embarrassed recently as I tried to make the monkey face as a 60 year-old and a friend told me it looked like I was having an orgasm.

A long stair case led up to the back of the house. The entry revealed a large screened in porch that housed a large sewing area. The women in my home produced beautiful clothing including dresses and magnificent costumes that I wore for Halloween and other events. I spent many hours in this room playing with my favorite toys, army soldiers, while they were sewing.

I loved the days when it rained and a cool, clean breeze would come into this room.

Adjoined to this room was a large kitchen. Wonderful smells came out of this area. My mother grandmother and sisters prepared magnificent meals.

Food was plentiful and good. I watched my mother prepare meals in a focused way. I loved liking the icing and cookie dough from the spoons. She told me that she was going to teach me to cook and take care of myself. How thankful I am that she did this. The skills I acquired served me well throughout my adult life and my travels. I would later share her recipes with friends I met in Europe, Asia and other parts of the world and they were delighted.

A table was in the large kitchen overlooking the greenery of the backyard and the skyline of Birmingham. There were always oranges and bananas, grape cool aide and gingerbread. The fried chicken and collard greens were frequent staples along with fresh tomatoes from the garden that I picked with my little hands.

The delightful corn bread with golden buttery softness melted in my mouth.
A large breakfast nook was in the next room. There I enjoyed large breakfasts with my sisters including Canadian bacon, oatmeal swimming in butter, sugar and evaporated milk with soft, fluffy eggs and orange juice.

My uncle’s room was near and he often got drunk and stumbled in. He was my mother’s brother. They looked so much alike. Later, I would learn that I was very much like him. He was the uncle that showed up with a dog, a swing set a bike, just for me.

On the other side of the breakfast nook was a full bath and an entrance to my grandmother’s bedroom. There my grandfather whom we called Pop lay on his back in the bed. He was bedridden. He called me Water Boy and when he called me, I would run happily with glasses of water.

Often, I would examine his medals and decorations from World War II. He had been an artillery commander in the war in Europe. He was injured when the black troops were put into action in Italy against Monte Cassino. His unit was left without replacements or ammunition for a long period. Left in the open elements, he suffered a back injury due to being in a fox hole with water up to his chest for long periods. Now, he was a disabled vet. I wiped his forehead with cold towels and helped him drink water. Holding his decorations and medals were always special moments for me. I ran my fingers along his buttons on his uniform and head gear. They were tarnished with age.

The other side of my grandmother’s bedroom led to a large family room. There, I spent many hours learning to read and count at a very early age. There were tables and sofas along with a TV set.  A large chandelier hung down from the ceiling very high up, several flights of steps. It was magnificent. I spent many hours staring at it, dreaming. There were four flights of steps and large landings with chairs and tables in this regal southern home leading to the upstairs area where three more bed rooms and a bath were. This included my mother’s room, my brothers’ room and my sisters room. I slept with my mother in a crib until my oldest brother left for college. A red patterned carpet adorned the steps and the landings.

There was a closet underneath the large steps going upstairs. I was often locked into this closet by my grandmother who often told me that I was never going to be anything but a black nigger just like my dad. Often, I would cry myself to sleep in the darkness of this closet. My sisters would come and get me and argue with her when she protested my release. I was placed in the closet for punishment and, just because I was me.

Later, I would tell her “You wait and see. I will be something.” I nearly destroyed myself trying to prove her wrong. I became an overachiever. It was not until I was 38 that I learned to stop living to prove her wrong. I learned to see the situation through her lenses and to forgive her. My relationship with my grandmother was complicated. She did love me. She made sure I had silk socks and nice blazer tops, ties and nice shoes. I was very young wearing Florsheim shoes.

My grandmother had a large porch that wrapped around the front of the house. It had gray paint and splinters that would stick into my foot if I dragged them along the surface in rough areas. The porch was adorned by tables chairs and swinging sofas.

Tall hedges separated her property from the neighbors and the street. Adirondack chair and table sets adorned the large front yard near beautiful rose bushes. My sister and I would lay on our backs and look up at the star filled sky and dream. I dreamed of being a sailor. Popeye was my favorite cartoon and I ate my spinach enthusiastically. On one of our rare trips, my father took me to Mobile, Alabama where I saw USS ALABAMA, a battleship. I saw the guns, the sailors, heard the whistles and I decided that I wanted to be in the United States Navy when I grew up.

We had to take chicken wrapped in aluminum foil on these trips to Mobile. My mother had to squat down next to the car to pee along the side of the road as we traveled. We could be killed if we went into the wrong places that did not allow black people. I was sheltered from this for a time until I became aware. By a very young age, I knew that we were negros and people wanted to kill us because of it. My sisters and I watched cartoons in the afternoons that gave way to the news that depicted negros being beaten and arrested by police in large numbers. The people being beaten and killed looked like me and my family.  I remember asking “Mommy, are we negros?” Her answer shattered my innocence and I began a lifelong struggle to survive this hypocritical dilemma. I had to look at myself as a negro, not just a person if I wanted to avoid trouble. This became a lifelong necessity if I was to survive. It was not until James Brown came out with the song “Say it Loud, I’m Black and I’m proud” that I began to call others black and not negros. We could not call people black before then. That was an insult.

Once, a lady who had a very dark complexion asked me “What color am I?”, my mother chuckled as she recounted the story. I had been told NEVER to call people black. My mother, a nurse, had told me that babies would eventually turn the same color as their ears. Many babies would have light complexions and dark ears. I was afraid to tell the woman that she was black so I told her that she was “Just like her ears”. My mother would laugh so hard when she told this story. How I wish I could hear her tell it again. I lost her in 2010.

Email ThisBlogThis!Share to TwitterShare to FacebookShare to Pinterest
Labels: The Early Years 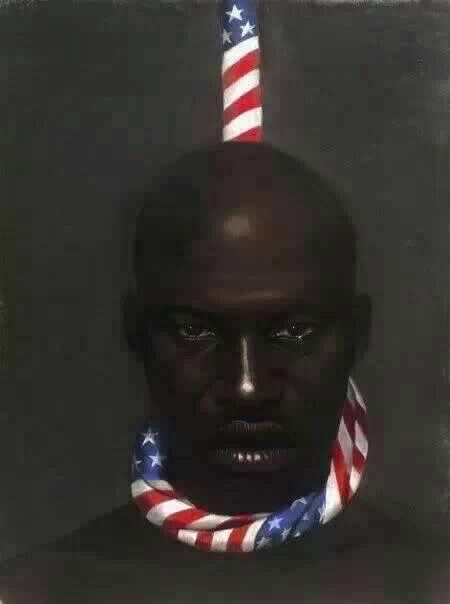